In this short piece I will discuss how, in BrXM (Hippo) 12 and 13, the question “Is user X allowed to perform action Y on document Z?” is answered. The Bloomreach documentation for version 12 and 13 on this subject is rich in detail but it did not help me very much to understand the big picture.

Let’s start with a diagram. Having worked exclusively with relational databases for most of my career, I instinctively tried to capture the authorization and privilege model in an Entity Relationship Diagram. Of course, the actual data model is not exactly a Third Normal Form but I found that looking at things as if it were made it clearer for me to understand. 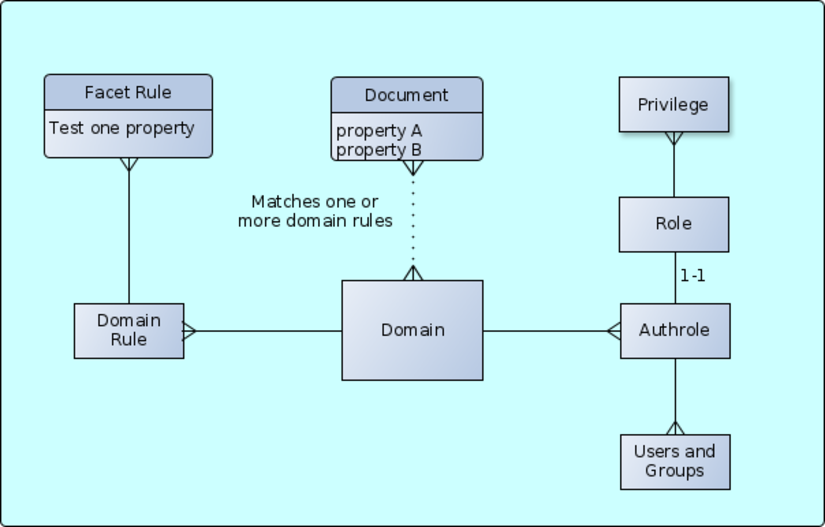 Central in the scheme is an entity which Bloomreach calls the Security Domain. It is a conceptual construct that serves to link together the three real world elements that together make up the security model: user,  privilege and document.

The details pertaining to how the test defined by a facet rule is applied to a document is well documented by Bloomreach so I’ll refer you to them for this particular aspect.

The link between users and domains, and between privileges and domains, are both made with the aid of an entity called the Authrole. This is a purely technical construct that serves as a link between users and groups on the one hand, and privileges on the other. Users and groups are seen as a single entity in my diagram, because they are interchangeable for the purpose of being linked to privileges.

So at one end an authrole points to one or more users and groups, and at the other end it points to exactly one Role, which is nothing more than a bunch of privileges wrapped up in a named set.

I have not been able to find best practices for implementing authorization and permissions in the CMS. The Bloomreach documentation has some tips and examples but these do not delve into the do’s and don’ts for configuring domains, authroles and priviliges. Here are my two cents worth:

All in all, it turns out that what at first seems a complex and unintuitive design does in fact make sense once you understand how the entities that have real world counterparts (documents, users, privileges) are connected by the more artificial constructions such as the domain, the authrole and the rules.

In version 14, an additional entity is added, the Userrole. A userrole defines functional privileges, which are global privileges (so not tied to any specific security domain). As Bloomreach explains it, “The usage and purpose of Userroles lies somewhat between Who and What”.