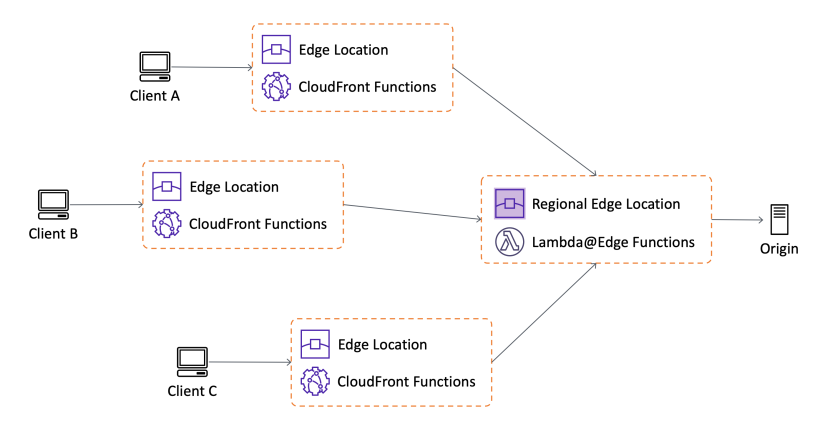 This is a simple example that adds a True-Client-Ip header to the request, so the Origin can use it to do further processing. It’s a common scenario where your application is on an instance behind a load balancer, but you need the actual client IP for some logic.

First let’s look at the language, which is Javascript. At the moment this is the only supported language in Cloudfront Functions. Other languages might be supported in the future, but that is not the case for the moment. So if you want to use Python to transform your request, your only option would be Lambda@Edge.

Since Cloudfront Functions is only meant for transforming requests and responses, some access and features have been cut away to make it more scalable, performant and cost effective. The most important ones that are not available are

These limitations are enforced, because Cloudfront Functions are process-isolated and need to be as quick as possible. In contrast, Lambda@Edge (and Lambda) is (VM)-isolated and is a bit slower to startup.

So, if you need to do anything more than transforming the request or response, you might want to use Lambda@Edge instead.

You can imagine that since Cloudfront Functions are process-isolated, it also comes with some limitations around the resources it’s allowed to consume.
Most noticeably, memory is limited to 2MB. So don’t run any memory hungry applications. And the whole deployment package of your Cloudfront Function cannot be bigger than 10kb. It will definitely be useful to use a minimizer on your code.

This might be the most important difference. Where a Lambda@Edge is deployed to one of the 13 regional edge locations, Cloudfront Functions are deployed even further down and closer to the viewer at one of the 280+ edge locations. That is why Cloudfront Functions are more ideal for situations where you need more control over the caching headers and need to transform the request so that there is more chance for it to find a cache hit.

What has been done better in Cloudfront Functions than Lambda@Edge is the monitoring. In Lambda@Edge you code deploy your code in us-east-1 and is then Cloudfront takes care of deploying it to the regional edge locations. The downside here is that all the Cloudwatch monitoring and logging are spread throughout the AWS regions and makes it a bit harder to dig into logs throughout these locations.
Cloudfront Function logs are a bit easier and can be found centrally in us-east-1 region. Any console.log() statements will log its output to Cloudwatch Logs in a loggroup called /aws/cloudfront/function/<function-name>.
Also all the monitoring can be found in us-east-1.

So, when should you use Cloudfront Functions over Lambda@Edge? As mentioned, Cloudfront Functions is meant for transformations. For example, you might want to redirect the viewer to a different cache, based on country. Or you would like to have more control over the Cache-Control header, based on the resource that is being requested.

In other cases where you would like to request some API’s first or retrieve files from S3, such as for adding a watermark, Lambda@Edge will seem like the better option here.

In case of doubt, try Cloudfront Functions first and migrate to Lambda@Edge when the need arises.