In this exercise we will set up VPC peering within the same region. We will experiment with routes, referencing security groups in different VPCs, overlapping CIDRs, and transitive routing.

In this exercise we will not complicate matters with private subnets and NAT. Instead, we will use public subnets only.

This is exercise 1.2 for the AWS Advanced Networking Specialty training. For an explanation and overview of all exercises, see the overview post.

The exercises are built on the assumption that you’re already familiar with the AWS basics and have achieved at least one associate level AWS certification.

Creating three VPCs in one region

The easiest way to launch VPCs is to use the Launch VPC Wizard. To start the wizard, open the VPC console, navigate to the VPC Dashboard and click the “Launch VPC Wizard” button. 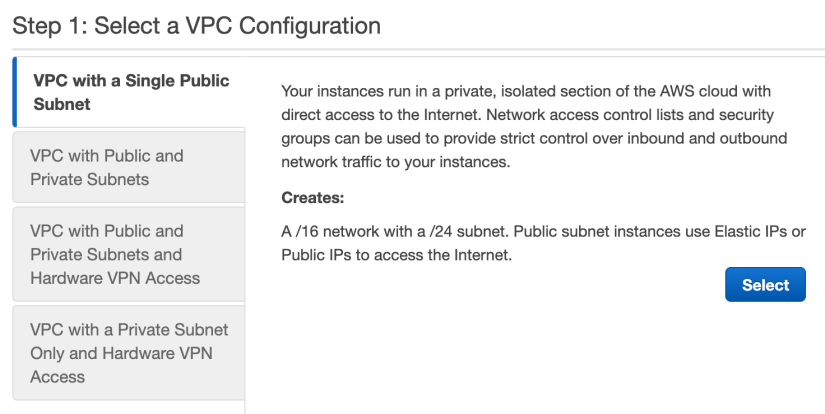 Select the “VPC with a Single Public Subnet” option and fill in the details as follows. 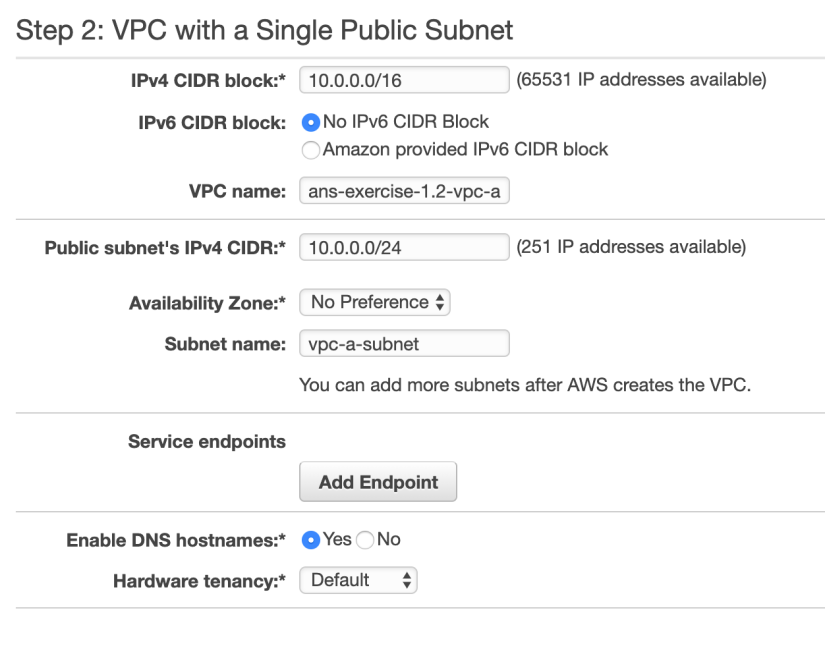 Click “Create VPC” and repeat for the other two VPCs. The end result should look like this:

Launch an EC2 instance in every VPC. They can be small instances (eg. t2.micro). Make sure that you:

When you’re done, you should have an overview like this:

Start SSH sessions and test connectivity between the instances

Log in to every instance and try to ping the other instances. Of course this won’t work, because the VPCs are in no way linked, and the instances live in completely separate subnets.

We will set up VPC Peering so that VPC B is connected to A and C, but C and A are not connected.

Fill in the fields to connect VPC A to VPC B. 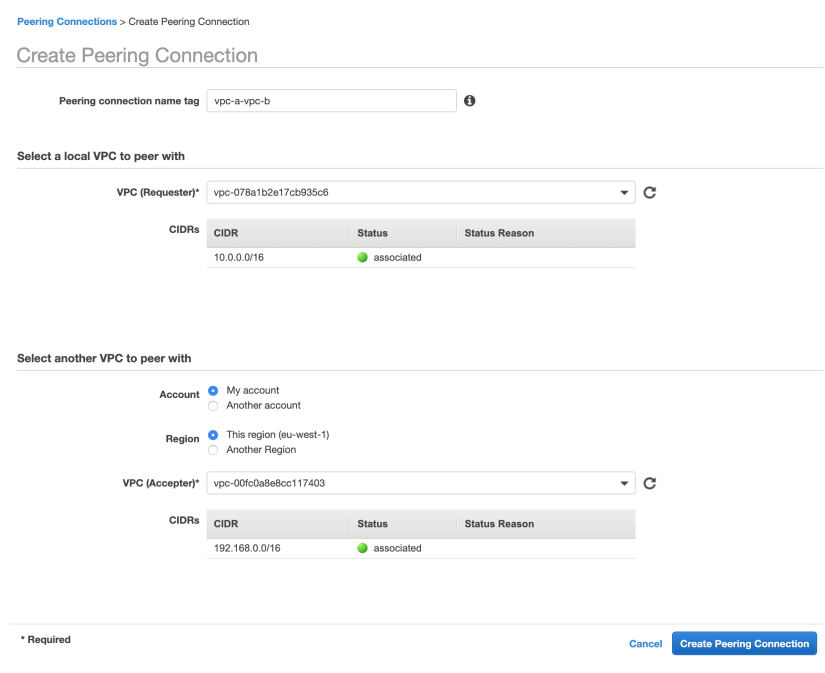 After you’ve filled in the details and clicked the “Create Peering Connection” button, you will find a peering connection pending acceptance. Click the Actions button and accept the request.

Repeat the same steps to set up a connection between VPC B and C.

When you accept the peering connections, you will see a popup like this:

The message says “To send and receive traffic across this VPC peering connection, you must add a route to the peered VPC in one or more of your VPC route tables.”, so let’s do that now.

We will need to set up the following routes:

The Route Table tab contains an overview of all route tables in all VPCs. This is a bit hard to parse, so we’ll navigate to the Subnets tab instead. Select the VPC A subnet and click the Route Table tab in the bottom. 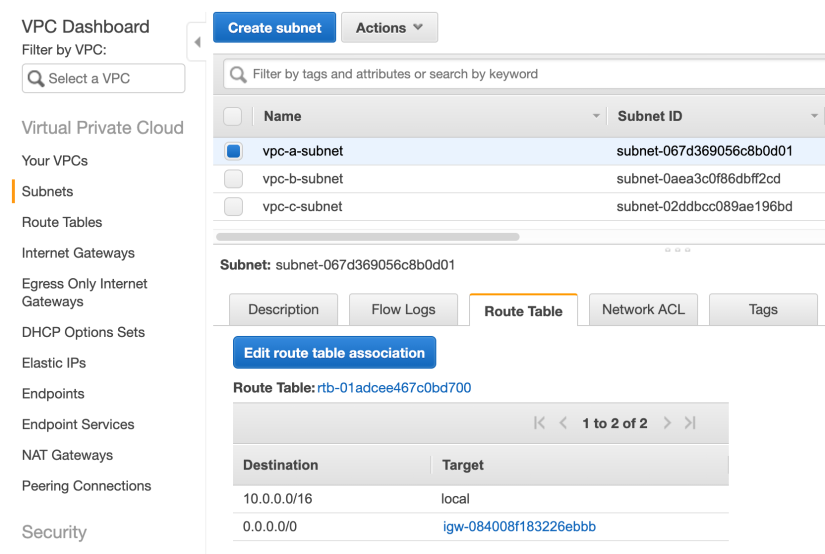 From here, click the route table link (rtb-01adcee467c0bd700 in my screenshot). This will filter the correct route table in the Route Table tab. Click the Routes tab in the bottom, then click the “Edit Routes” button.

Go back to the Subnets tab and select the VPC B subnet. Like before, click the Route Table tab in the bottom and click the link to the correct route table.

Because VPC B is connected to both VPC A and C, we will need to add two routes to this route table. Make sure that you forward traffic for a CIDR to the correct peering connection.

When you’ve set up the peering connections for VPC B, finish up by adding the last route to VPC C’s route table.

Accepting traffic in the security groups

Navigate to the instance in VPC B in the EC2 console and select its security group. 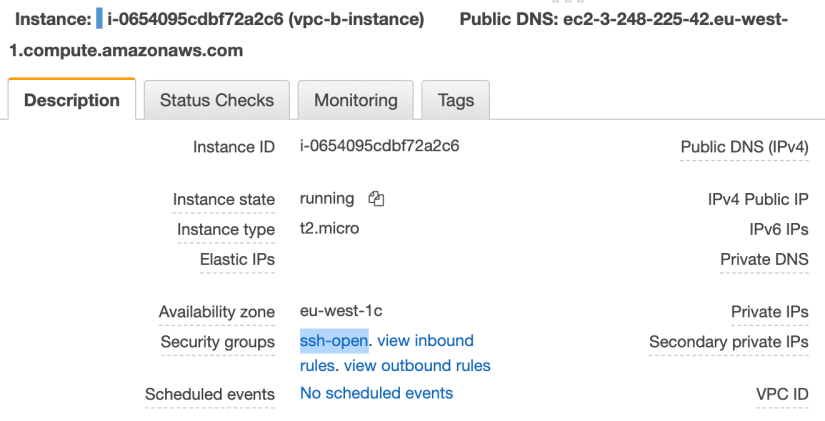 Then click the Inbound tab and press the Edit button. 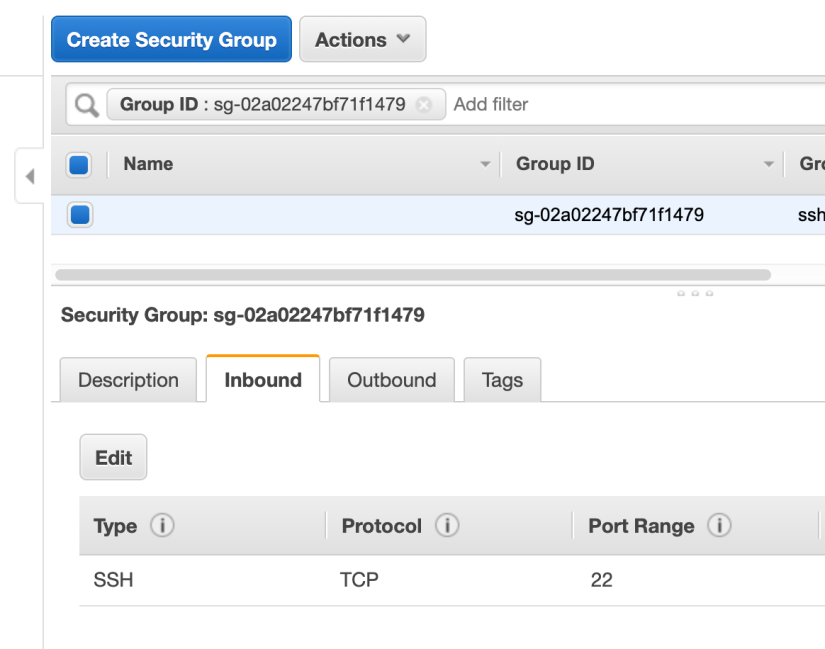 Click the Add Rule button twice and fill in the following rules, allowing ping traffic from VPCs A and C.

As you can see, this works perfectly!

First, look up and copy the security group ID for the instance in VPC B: 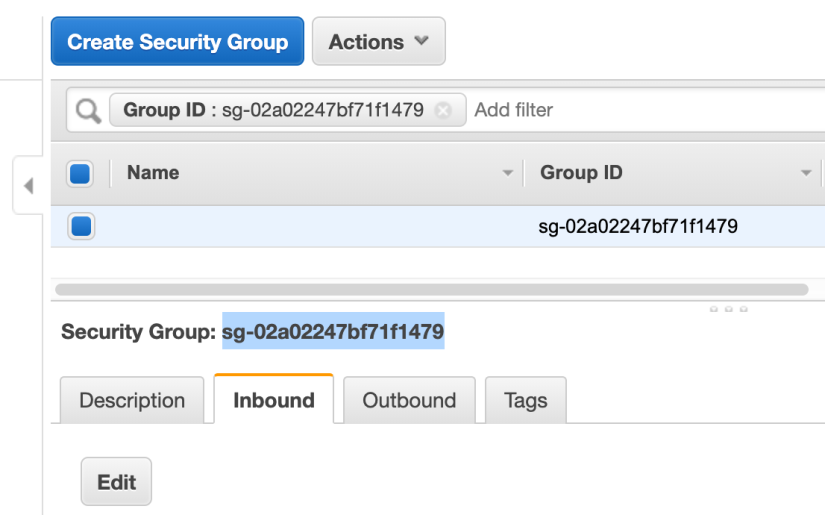 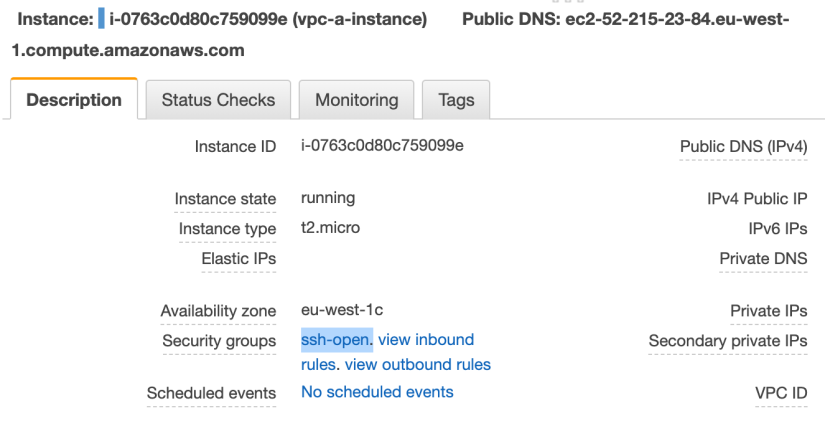 Navigate to the Inbound tab and click Edit again: 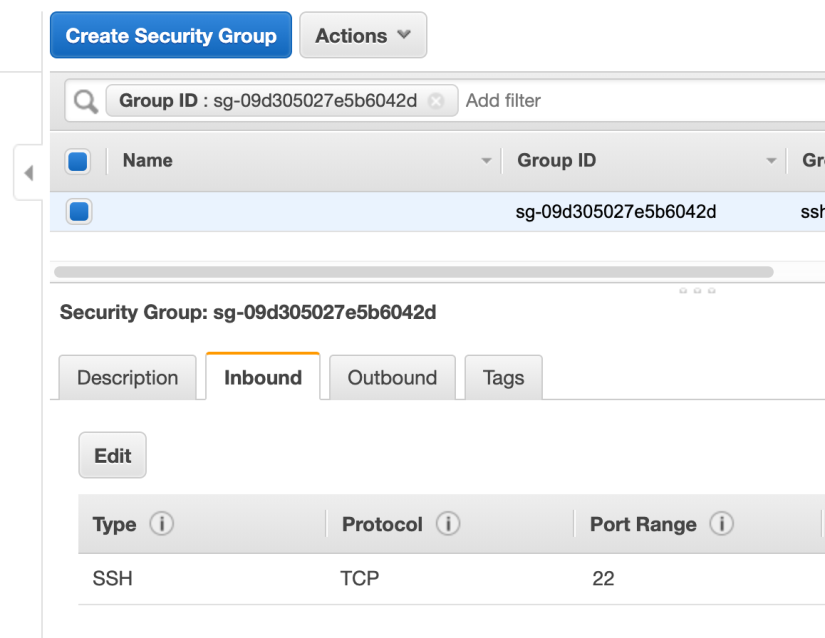 Fill in the the security group ID for the instance in VPC B that you just copied:

A quick overview of what we’ve built so far:

Note: Referencing security groups by ID like we’ve done above only works within the same region. See the last chapter in this post for an example.

Since our VPCs are connected like this: A <-> B <-> C, you might expect that it would be possible to connect from an instance in VPC A to an instance in VPC C too. However, this is not the case. The implicit router for each VPC will only allow traffic when either the source or the destination IP address resides in the VPC.

There are three solutions for this problem:

When you have only three VPCs, a link between VPC A and VPC C makes sense and is perfectly manageable. However, as the number of VPCs grow, the number of VPC peerings grow exponentially. See the diagram with five VPCs below; it requires 10 peering connections. Six VPCs would require 15 connections. Seven VPCs require 21 connections, and so on. This is a lot to maintain. 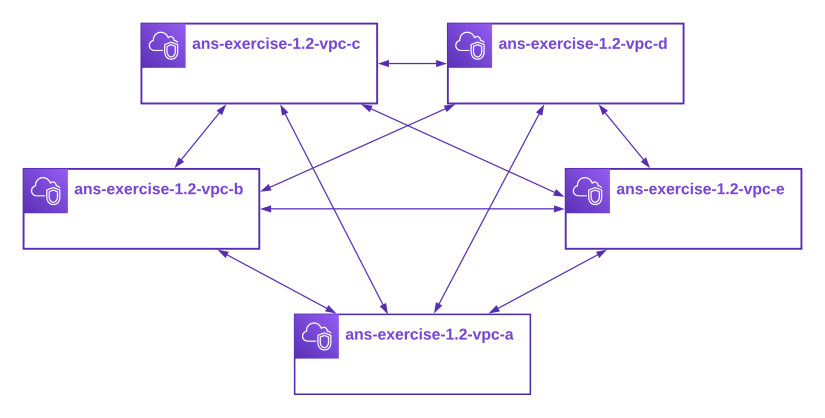 Because managing this architecture is difficult, network architects have opted for a simpler solution; the VPN overlay network.

In a VPN overlay network, all VPCs or EC2 instances connect to a central VPN server in a Transit VPC. All inter-VPC traffic is routed over the VPN server, which in turn routes the traffic to the correct VPC.

Because the VPNs are set up using the VPN server’s IP address, the VPC sees inbound traffic is targeted at an IP address in its own CIDR, and will allow it. 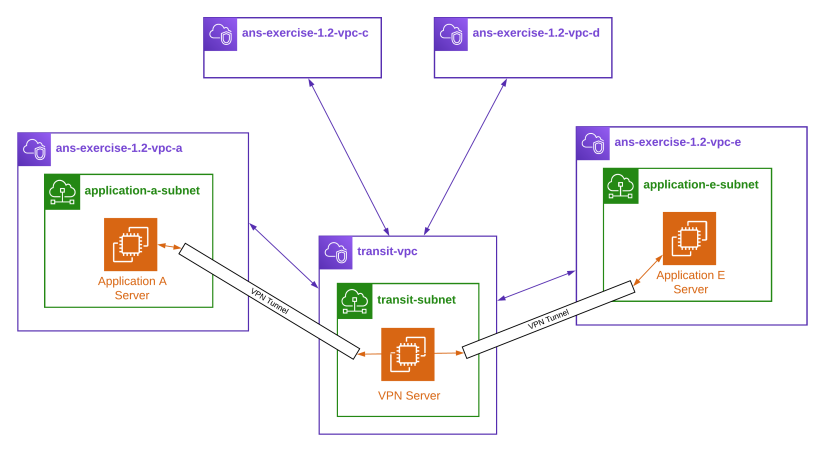 The VPN Server does not have the same source-destination-check restrictions the VPC does (although you have to disable the check on the EC2 instance), so it can route traffic between CIDRs that are not its own.

The downside of this solution is that you need to manage and scale an EC2 based VPN server. To solve this issue, Amazon has released Transit Gateway.

Transit Gateway is a technology that allows multiple VPCs, VPNs and Direct Connect to connect to a single gateway. This gateway does not have any source-destination restrictions, and can be configured to route entire CIDRs, partial CIDRs or no traffic between it associated networks. It is fully managed by Amazon and has a very high bandwidth capacity. 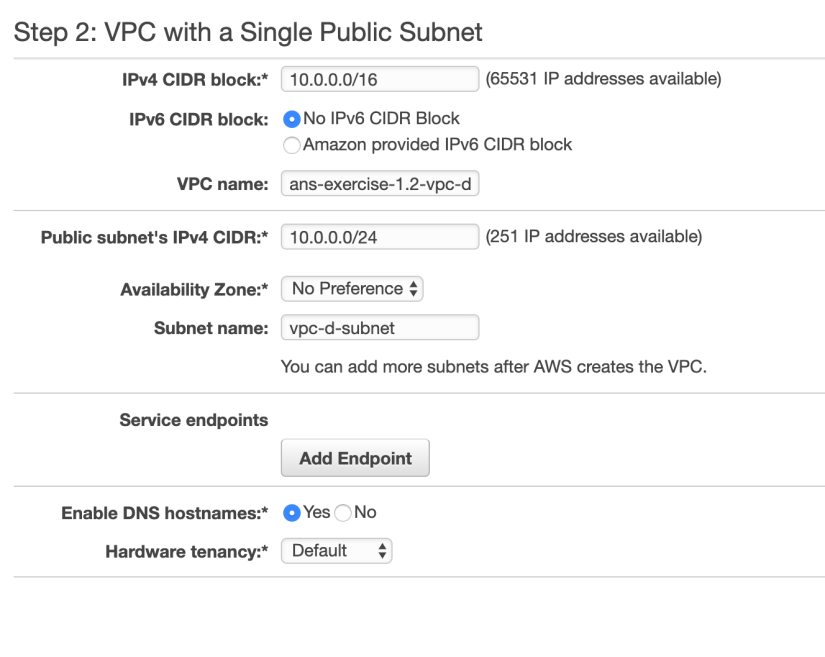 Next, try to create a VPC peering between VPC A and D: 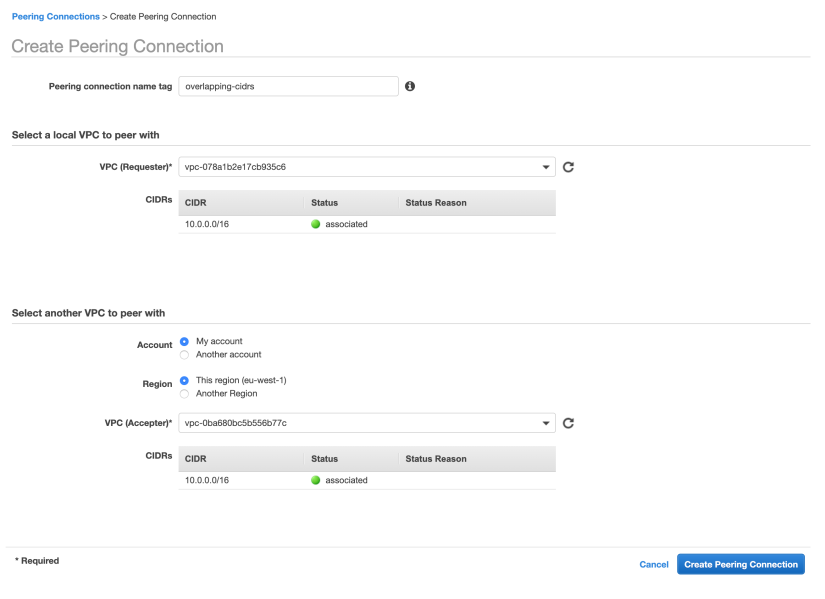 This will result in an error A peering connection cannot be created between 2 VPCs that have overlapping CIDRs. Please select 2 VPCs which have distinct CIDRs.: